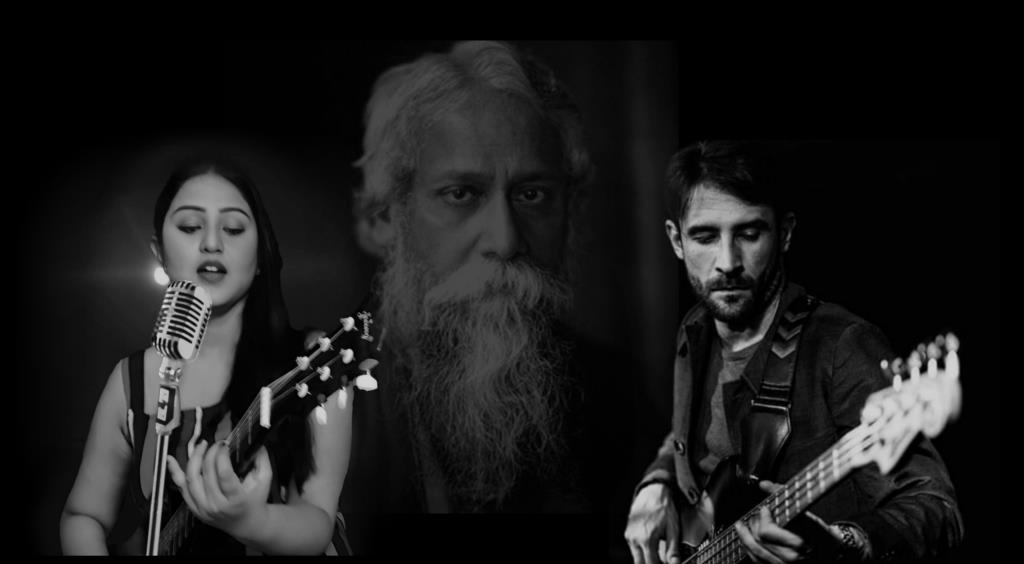 Kolkata, 6th May 2022: Whenever we think of art, music, poetry, literature, and most importantly versatility in India and the first name to pop up in all our heads is that of the Rabindranath Tagore. He was the first non-European to win a Nobel Prize in Literature in 1913 for his selected poetry collection titled, ‘Gitanjali’, which was originally written in Bengali and later translated into English. It is quite interesting that not only in India, even today Tagore is one of those important names that pop up in the head of many people globally. An Indo-French collaboration that took place between Indian Singer Soumita Saha and French Musician Greg Sauzet is one of the brightest example of the fact.
Before Tagore’s fame spread all over the world in 1913, the talent of Tagore had already attracted the attention of personalities such as the famous traveller Alexandra David Neel and the poet Saint John Terse, French ambassador to London.
His association with Romain Rolland paved the way for a historic, first-ever coordinated awakening and mobilisation of world intellectuals. Tagore became a regular visitor of La Maison Autour Monde, the house of famous businessman and patron of the arts Albert Kahn. In this house are kept invaluable archives of the poet and his family.
The first visiting professor invited to Visva Bharati was French scholar Sylvain Levi, in 1921, whose collaboration boosted Tagore’s initiative of setting up a university. His relationship with France also played a pivotal role in the incarnation of the poet as a painter with his first ever exhibition held in Galerie Pigalle in 1939. In 2022 Soumita Saha and French Musician Greg Sauzet revived Tagore’s French connection having collaborated for a music video on a Tagore Song.
According to the Gregorian calendar, he was born on May 7, 1861, in Kolkata to parents, Debendranath Tagore and Sarada Devi.As per the Bengali calendar, he was born on the 25th day of Boishakh month, in the 1422 Bengali Era. However, in West Bengal, Rabindranath Tagore’s anniversary is observed as per the local Bengali calendar. The day in Kolkata is popularly known as Poncheeshe Boishakh or Rabindra Jayanti. Tagore is such an integral part of the Bengali psyche and omnipresent in the art and culture scene of Bengal. And hence, it would have been really awkward if people had to sing anyone else’s creation to celebrate the birthday of the poet who has given a song for every occasion. His Birth Anniversary is celebrated across the country through cultural events. In recent era of digitisation of music his birthday anniversary is one of the vital occasion for releasing rendition of his songs. To pay tribute to Rabindranath Tagore, the Bengali polymath who is said to have singlehandedly reshaped Bengali literature and music Indian Singer Soumita Saha and French Musician Greg Sauzet collaborated once more for a music video on a Tagore Song sung by Soumita and arranged by Greg. The music video has been shot partially in India and Partially in France. Two musical buddies living in two extreme ends of globe United to rebuild the bridge of Indo- French Collaboration having held Tagore the strong pillar.
Tagore’s works have inspired countless generations of young artists across the globe. Greg Sauzet read Tagore ten years ago in a philosophy collection book my grandmother offered him. The French Musician was really impressed by the accuracy of his words and thoughts. Greg Sauzet being a multi-talented musical is a sitarist with great grasp on Hindustani classical music. He is a disciple of maestra Joyeeta Sanyal. ” I’m very excited about the release of this song. It’s a honour to record this song with the great singer Soumita Saha. I am a great admirer of Tagore, it feels amazing to have collaborated with Soumita, it’s quite thrilling that I am collaborating with a great contemporary singer who also hails from the land of Tagore.” Added Greg. Soumita Saha also added ” Last time we celebrated love with a Tagore Song.As we know In the vast collection of Rabindrasangeet, every emotion will find a song attributed to it. This time Greg himself chose the song “Aaye Tobey Sahochori”..and this time we are paying tribute to Tagore and celebrating Friendship” . The song shall be digitally released from renowned record label Melotunes on 4th May. Music Video shall release on 7th May. The song has been recorded by Jhantu Jana, music has been re-arranged, mix mastering of the audio track Credit all belongs to Greg Sauzet. The music video has been recorded partially in kolkata, partially in Pointier, France. Directon of Photography credit goes Soumita’s fiancee to Agniv Chatterjee.