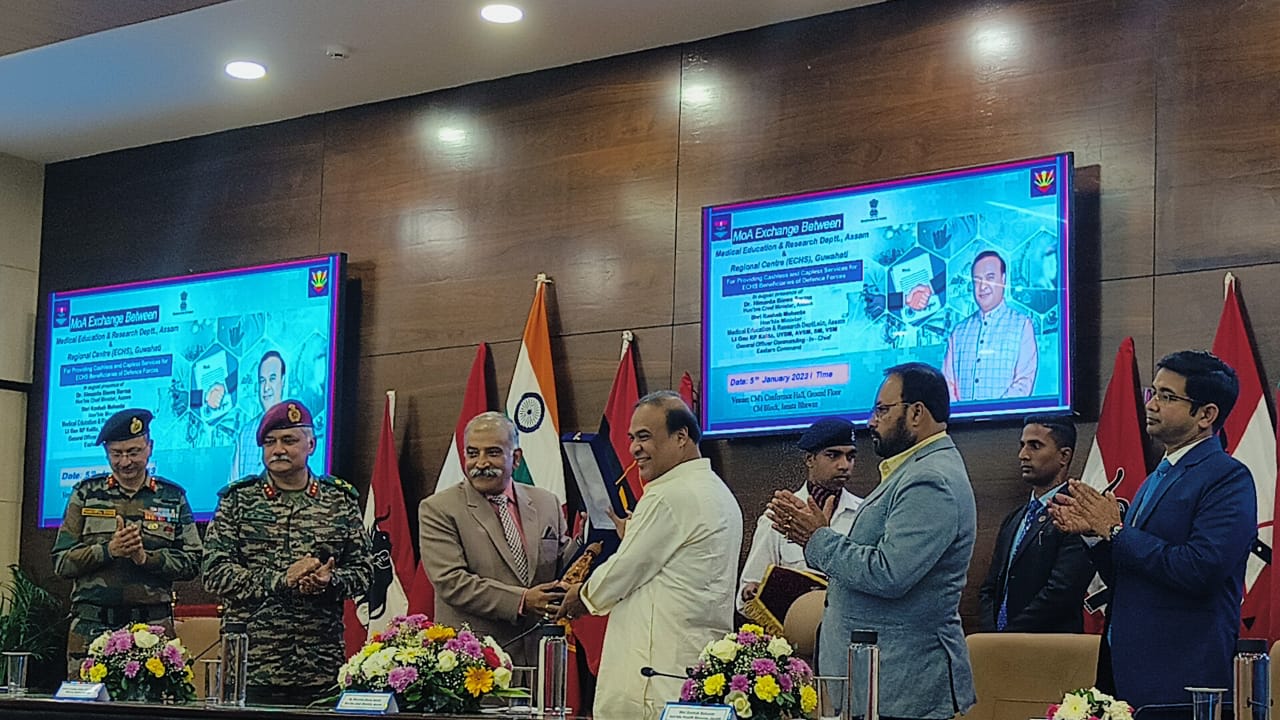 Guwahati, 5th January 2023: Ex-Servicemen Contributory Health Scheme (ECHS) has been functional for the Ex-Servicemen and their dependent’s health care since 2004. A total of 12 Polyclinics across the Assam State provide health care in collaboration with the Empanelled private hospitals and Military Service Hospitals.

A necessity was felt at the highest level to take a concrete step to empanel the additional Medical facility in Assam in order to alleviate the hardship of the ECHS beneficiaries who even for minor surgeries/ ailments were compelled to move to Guwahati from remote Districts of Assam. Accordingly, to bring in perceptible improvement in the ECHS treatment facilities, the initiative was taken by Regional Centre, Ex-Servicemen Contributory Health Scheme (ECHS), Guwahati under the guidance of
Lt Gen RP Kalita, UYSM, AVSM, SM, VSM, General Officer Commanding-in-Chief, Eastern Command to put forward the process to empanel the Govt Medical Colleges in the state of Assam with proactive assistance from Chief Minister of Assam Himanta Biswa Sarma.

To further provide State of Art facility in treatment, especially for oncology (cancer care) ACCF (Assam Cancer Care Foundation), which is a State Government and TATA Trust, initiative functioning under the able chairmanship of Chief Minister
Shri Himanta Biswa Sarma has also been empanelled with ECHS. The ten units of ACCF (Assam Cancer Care Foundation) presently co located with the Government Medical College / District Hospitals of Assam will provide cashless and capless service in CGHS (Central Govt Health Scheme) rates to Ex-servicemen and their dependents of Assam and other States of North East under this agreement. This will be a major relief to Veterans and their Families, as this arrangement will ensure state of art cancer care available closer to their home and would remove the hardship of cancer patients travelling outside the state for cancer related treatment.

For the first time in the recent decades, Government Medical Colleges have been empanelled with Ex- Servicemen Contributory Health Scheme with the sincere assistance of the State Government of Assam. This Memorandum of Agreement will facilitate Cashless and Capless treatment of almost 1.12 lakhs beneficiaries. Unlike other schemes, this scheme covers all type of diseases. This arrangement will also facilitate ECHS beneficiaries in availing specialist treatment within their own district and very close to home. Empanelment of Govt Medical College and hospital will not only benefit entire ESM fraternity of Assam, will also benefit ECHS members from neighboring small states. Similar arrangements are being attempted in other NE States, viz Tripura, Manipur, Mizoram and Meghalaya to ensure adequate Hospital/ Health cover to the ECHS beneficiaries of entire North East.