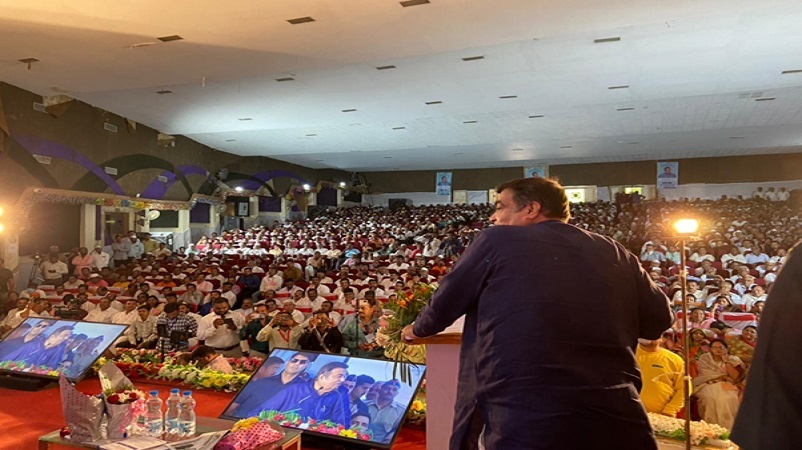 Mumbai, 22 April 2022: Union Minister for Road Transport and Highways Nitin Gadkari said that the Union Government is committed to economic development of Dhule and Nandurbar districts and to provide employment opportunities to the local youth. Gadkari was speaking at the inauguration of two national highway projects at Dhule today. These roads projects of total 261 km length will be built at a sanctioned cost of Rs 1791 crore would be completed within the next three to four years, stated the Union Minister. He laid the foundation stone for these important development projects related to Dhule and Nandurbar districts at Khandesh in Nandurbar.

If PM Narendra Modi’s vision of a self-reliant India is to be realized, then it is important to eradicate poverty by bringing about development of backward areas of the country like these two districts, said Gadkari. Then only, unemployment would be alleviated in this region, he added.  In this context, he mentioned that logistics play a vital role to bring about development and economic activities in an area.

Road Transport and Highways Ministry is providing basic facilities like toilets, GPS system and other amenities at 650 places along national highways. Besides, Gadkari has also instructed to carry out water conservation work by deepening the river channels, de-siltation and creating new water sources.

The details of the NH projects are as follows:

The projects planned under Bharatmala scheme to provide modern and high quality roads to Dhule and Nandurbar districts will further strengthen the connectivity of Maharashtra with Gujarat, Karnataka and other states as well as reduce traffic congestion in Dhule and Chalisgaon. These road projects will be useful in streamlining the transportation of agricultural produce in Dhule district, which is famous for its pepper production.

These road projects will make it easier for citizens to reach to tourist attractions like Pitlakhora Caves and Gautala Sanctuary. It will also be easier to reach religious places in Dhule and Aurangabad districts. The Shewali-Nandurbar road project will be useful for the development of tribal areas in the district. Some of these projects are under the Public Works Department, Government of Maharashtra.

Gadkari also participated in a function organized by Udyog Prabodhini Foundation in Dhule. There he said that the Centre is making various efforts to turn the farmers into energy producers, apart from being food producers. With a view to reduce the consumption of petrol, vehicles with flex engine and running on 40 per cent electric and bio-ethanol would be introduced in the future which would benefit the farmers by way of increasing consumption of ethanol from sugarcane. The Minister said that Government is also towards production of green hydrogen. He hoped that this new technology should reach out to the entrepreneurs for the rural, agricultural and forested areas, which would help in overcoming the backwardness of Dhule and Nandurbar districts.

Further, Gadkari said that steel fiber would be used instead of steel for road construction, which would lead to around 40 per cent savings in project-cost.

The Union Minister also observed “there is a need to increase entrepreneurship in the society” and said that should be more job-givers than job-seekers.

Members of Parliament Subhash Bhamre and Heena Gavit and local MLAs were present on the occasion.

Mumbai-Pune Travel Time To Be Reduced By 90 Minutes

Maharashtra Inaugurates its Pavillion at WEF, Davos, makes a pledge towards sustainable development for a trillion dollar economy