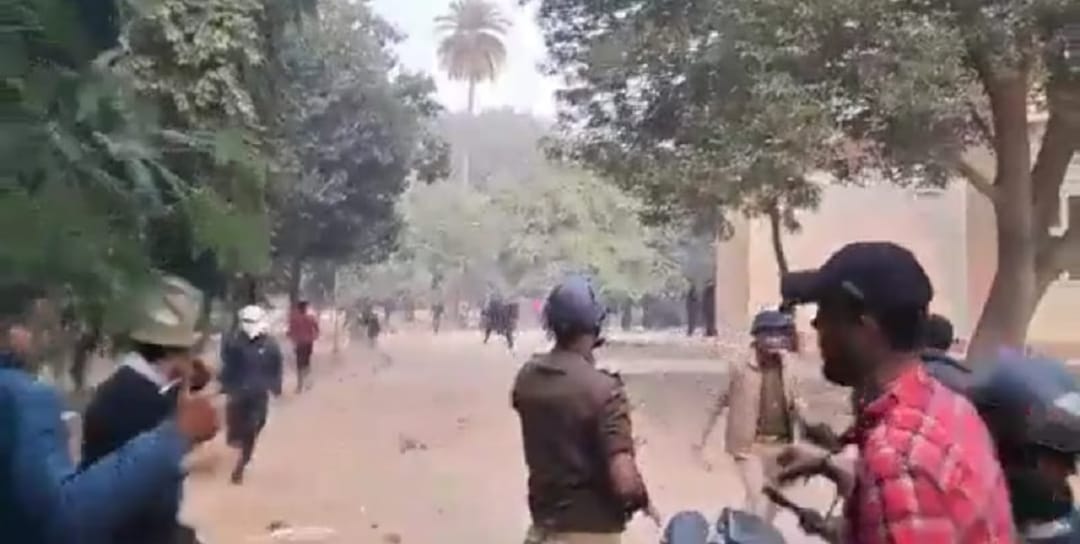 Prayagraj, 19th December 2022: On Monday afternoon, there was a sudden rush of the student union on the campus of Allahabad University, located in Prayagraj. The students gathered on the university campus and created a ruckus. Expressing anger, the students fiercely carried out sabotage and arson. They allege that the guard posted at the university gate opened fire.

It was told that despite it being a holiday, the students tried to open the locked locks of the Student Union building. During this, the security personnel deployed in the university tried to stop them, and only then a dispute broke out between the two sides.

Abhishek and Harendra Yadav, who were among the students, alleged that the guards opened fire. The students got angry and there was a lot of uproars. Students from all the hostels thronged the university campus and also pelted stones.

On the other hand, on getting the information, a large number of police forces reached and started handling the situation. Seeing the seriousness of the tension regarding the case, Police Commissioner Ramesh Sharma and other officers reached the spot.

The tension on the university campus increased so much that the DM also reached the spot. At the same time, Akash Kulhari was also engaged in convincing the students. Student leader Vivekananda suffered a serious head injury during the stone pelting, but he continued to persuade the students. He asked the students to take out a peace march instead of stone pelting.

Although all the students later returned to the Students’ Union building, they continued to pelt stones. Injured student leader Vivekananda met the DM and police officers when the situation returned to normal by 5 pm. He informed them about the whole incident. During this, Vivekananda said that until there is no trial and arrest in the case, he will not get the wound bandaged and will not leave the university.

Prayagraj Police Commissioner said that the situation has been brought under control after a clash between security personnel and students. Both sides are being talked about. The students have also been gathered in one place. Legal action will be taken after the investigation.