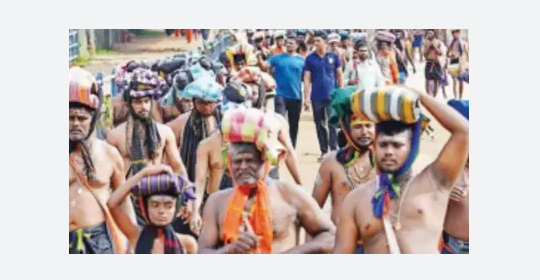 Thiruvananthapuram, 22nd December 2022: the Sabarimala temple committee said that they are witnessing heavy rush at the pilgrimage centre since December 11 amid the ongoing annual pilgrim season.

On November 17, which marked the beginning of the two-month-long pilgrimage season of the annual Mandalam-Makaravilakku festivals, online portal was opened for believers. Considering the heavy rush every year, elaborate security arrangements as usual have been arranged by the authorities at the location.

“Special arrangements have been made at the temple in view of the heavy rush. Devotees are being escorted from Pampa to Sannidhanam in a controlled and segmented manner. Security personnel have been deployed at each point for this purpose,” Sabarimala Special Officer Harishchandra Naik said.

“2,61,874 pilgrims visited Sabarimala in the first six days of this pilgrim season. There are indications that the number of devotees will increase in the coming days,” Kerala Devaswom Department Minister K Radhakrishnan said.

Also, incidents of pilgrims dying amid the rush, are normal here. This year 23 people were reported to have died of Cardiac arrest during their pilgrimage.