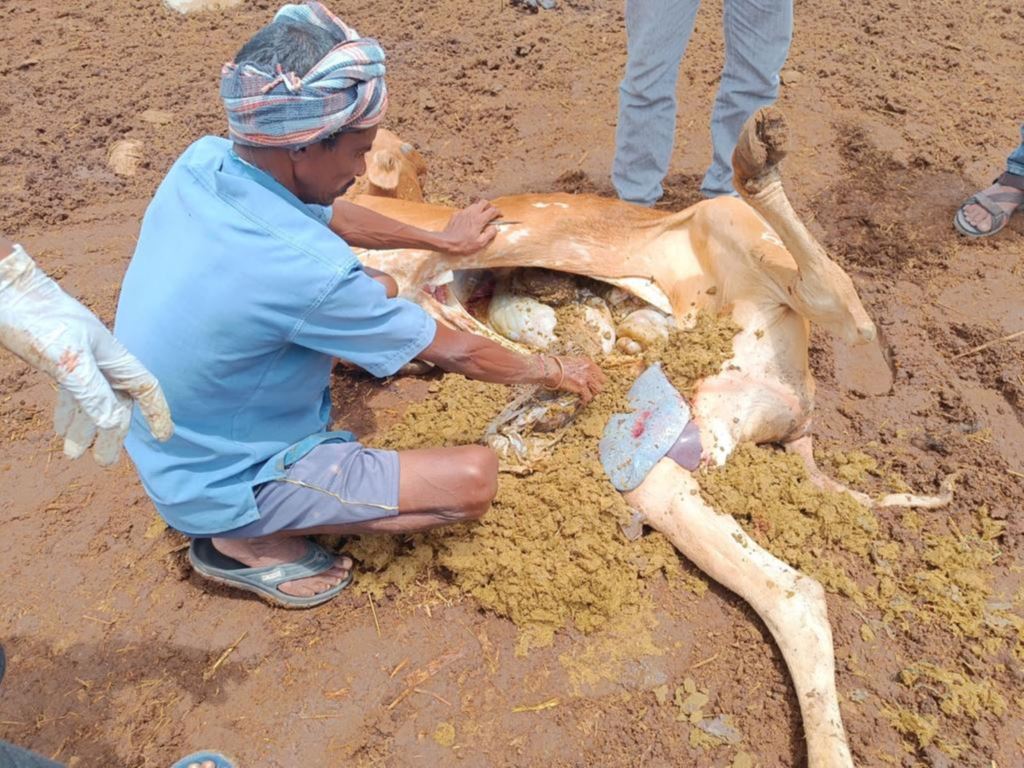 Hyderabad, 17 June, 2022: Dhyan Foundation which has been working aggressively for the cause of rehabilitating cattle rescued from butchers had found kilos of plastic in the gut of a dead cattle. At Dhyan Foundation Hyderabad Gaushala, a post-mortem was conducted for few rescued cows that suddenly died. The shocking reports revealed large amount of plastics and nails in the gut of a dead cow which choked it to death. The foundation also advocates the health hazards of eating this kind of meat which is dangerous for its consumers.

The constitution of India sets a directive to protect cow and its progeny in the country. This has been respected and adhered to, by majority of Indian citizens, diversities in culture, geography, faith or social position not-withstanding. We are a nation known for our diversity, and how we coexist despite individual differences. However, every society has some uncivilized elements, who create chaos and cause destruction. For example, the notorious cattle mafia in our country.

The cattle mafia loot from farmers, dairies and shelters, they pick up strays, to hoard cows, bulls, calves by hundreds of thousands. They inject them with sedatives and poisons, keep them hungry for days and months, tie their limbs, break their horns, stuff them like sacks of potatoes in trucks, boats, and even auto-rickshaws, to smuggle them to illegal butcheries and also outside India, to Bangladesh, Pakistan and the like. They are seasoned criminals who do not shy away from running down vehicles or attacking and even killing civilians and officials, should anyone come in their way.

Dhyan Foundation Volunteer Harish commenting of the situation said that, “As a volunteer of Dhyan Foundation, what I have observed is that our nation is known for its unity and diversity however there are a few elements which cause chaos and destruction by looting the weak. They internally sell cattle to illegal butchers through trafficking which needs to be halted with the help of competent authorities, which helps our nation from the anti-social elements. Requesting our brothers of other faiths to be cautious of these kind of poisonous meats which is in-turn deteriorating their health slowly and steadily.

This illegal business of cattle trafficking generates hordes of unaccounted cash, or black money, which is pumped into anti-national activities including, but not limited to terrorist movement, fake currency trade, arms smuggling and narcotics smuggling.

The consumers of this kind of meat supplied through this chain are at maximum risk. The cattle supplied is ill-kept, fed on garbage and sanitary wastes, injected with toxins, in trauma and so generating negative hormones, and often the carriers of dangerous diseases. Most of these cattle have plastics filled in their stomachs.

Dhyan Foundation, which is a spiritual and charitable Foundation working pan India to save animals from pain and cruelty by way of 45 plus shelters said that they are working for protection of cows and its progeny from illegal slaughtering since 2008, all over the country.

The foundation believes that cattle mafia have no religion – they come from all faiths, commerce is what drives them. They are traitors to our country and traitors to the citizens. They are killing our brothers of other faiths by supplying them with poisonous meats.

Youth from across the world waved the Indian National Flag at the world’s largest meditation center at Heartfulness Institute Hyderabad, as part of the National Tiranga Campaign

79% of business executives in India say keeping up with the speed of digital and other transformations is a significant risk management challenge: PwC survey

The Installation Of Gunpowder In The Twin Tower Begins; To Be Blasted By August 28

Youth from across the world waved the Indian National Flag at the world’s largest meditation center at Heartfulness Institute Hyderabad, as part of the National Tiranga Campaign