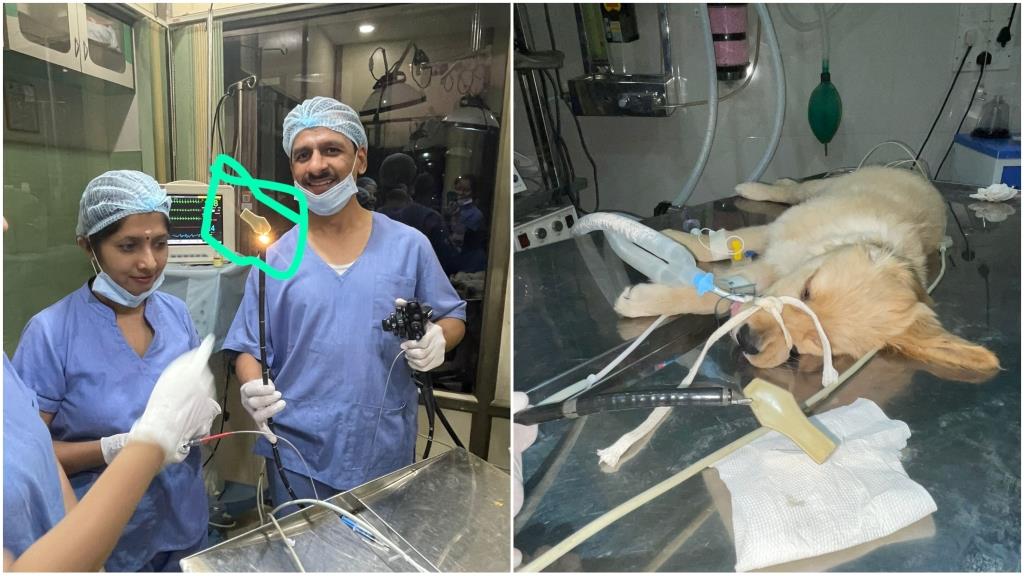 Pune: A team led by Dr. Narendra Pardeshi, India’s leading Vet Surgeon from Pune Small Animal Clinic, Pune successfully removed a plastic ice cream spoon accidentally swallowed by a 12-Weeks-Old pup. The dog who was unable to eat and developed ulcers due to the spoon stuck in the stomach underwent a gastroscopy procedure. Now, the dog has resumed his daily routine with ease and has started eating food again.

Pune-based Shekhar family’s 12-week-old Golden Retriever pet Nora was playful and active until March 2022, when she accidentally swallowed an ice cream spoon. The pup was immediately rushed to a local vet who took an X-ray. The vet gave medicine and assured them that Nora will be alright as no abnormality was spotted in the X-ray. Suddenly, to the pet family’s dismay, Nora stopped eating and wasn’t cheerful like before. However, the pet family was referred to Dr. Narendra Pardeshi wherein her life was saved.

Dr. Narendra Pardeshi, India’s leading Vet Surgeon from Small Animal Clinic said, “On arrival in an emergency, the pup was weak, pale, had ulcers in the stomach, and couldn’t eat anything. The pup was scheduled to undergo gastroscopy on 29 March 2022. The pre-anesthetic and presurgical test was done so that there is no problem during the procedure. The dog was thoroughly examined and given anesthesia before the surgery.”

Dr. Pardeshi added, “While performing Gastroscopy, a long flexible tube called gastroscope or endoscope is used which has a tiny camera and light at the end to look inside the stomach. The spoon was located in the stomach and removed with the help of a forceps passed through the gastroscope instrument. This procedure is non-invasive and doesn’t require any cuts or incisions. The surgery lasted for 45 minutes and the pup was discharged the same day. The pup may have needed an endoscopy if the foreign body would not have been lodged in her stomach. Not treating the pup at the right time could have led to bleeding. The spoon will get stuck and form a blockage. This means that the food and water will not pass through the stomach. Plastic is not digestible, so it will not break down in your dog’s stomach. Plastic with sharp edges will get lodged in the wall of the stomach or intestines leading to inflammation or perforation (hole or tear in the lining of the intestines) which can be life-threatening for her. After the successful treatment, the pup has started eating again and has resumed her day-to-day life with ease.”

“I was worried when Nora swallowed the plastic ice cream spoon accidentally. She stopped eating and wasn’t active, playful, or cheerful. She would just sit in one place without moving. I was alarmed and consulted Dr. Pardeshi who gave her a new lease on life. Now, Nora can do all her activities with ease. She has shown positive signs after the surgery and is eating properly now. I thank Dr. Pardeshi and his team for prompt treatment and management of my pet,” concluded Shekhar family.