New Delhi, 22 April 2021: Polling was today conducted peacefully in14,480Polling Stations spread across 43 Assembly Constituencies, in the sixth phase of elections in the State of West Bengal. Voters set an example of Covid appropriate behaviour following due protocols of sanitization and social distancing. Voter Turnout of 79.09% was reported by 5 PM for Phase VI of elections today.

Further to instructions issued on 16th April 2021, ECI has again invited the attention of all National, State Political parties to abide by the laid down covid protocols during campaigning. ECI has instructed District authorities to initiate action under Disaster Management Act 2005, Epidemic Diseases Act 1897, etc. in case of any violations and to cancel permission for further campaigns even if granted earlier.

During the ongoing elections till this phase in West Bengal, a record seizure of Rs.316.47  Crores has already been reported till date.

Details of Electors, Polling Stations & Observers in the poll are as follows: 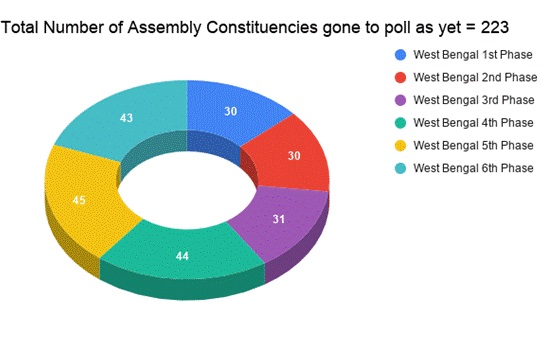 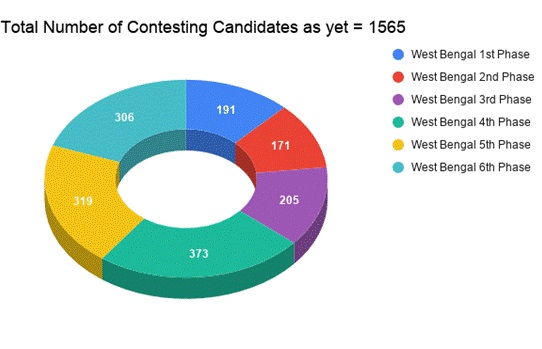 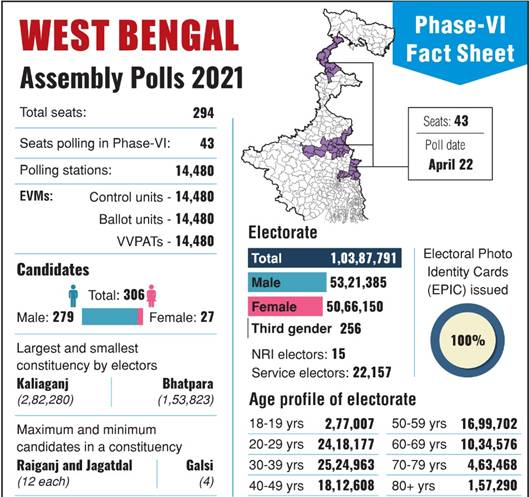 To ensure inclusive and accessible elections, the Commission has extended the option of postal ballot facility to PwDs, Senior Citizens above the age of 80 years, COVID-19 suspect or affected persons and persons employed in essential services. The Observers at the ground level oversaw that proper arrangements for facilitation were made available for these voters. 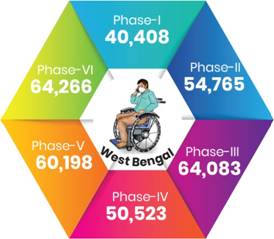 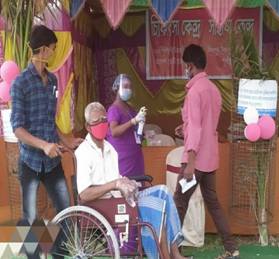 A total of 14,480  Ballot Units (BUs), 14,480 Control Units(CUs) and 14,480 VVPATs were used in West Bengal during this phase. As per standard procedure all these EVMs and VVPATs had already undergone First Level Checking, Randomisation, and Commissioning in the presence of Political Parties/Candidates agents. During FLC and during commissioning each of these EVMs and VVPATs had undergone mock polls. Today before the start of the poll each of the EVMs and VVPATs again underwent a mock poll in the presence of polling agents of the candidates with minimum 50 votes cast on each, as per standard procedure. At the end of the mock poll the results of EVM were matched with the result of VVPAT slips and shown to the polling agents. Nonfunctioning rate of EVMs and VVPATs during the poll is comparable to what was experienced in the last few polls.

As a major push for conducting free and fair elections, live monitoring and webcasting of more than 50% of Polling Stations including critical and vulnerable polling booths has been put in place as per Commission’s norms, to ensure a safe and secure atmosphere in polling areas. Commission, CEOs, DEOs, Observers could watch live streaming and keep a close watch on these polling booths.

During the ongoing elections till this phase in West Bengal, a record seizure of Rs. 316.47 Crores has already been reported till today. The seizure figures, which includes seizure of cash, liquor, narcotics, freebies etc., is 7.1389 times of the total seizure of Rs. 44.33 Crores in General Election to Legislative Assembly, 2016. The Commission has been laying specific emphasis on inducement free elections and curbing the malaise of undue money power, liquor, freebies. For effective monitoring a total 1137 Flying Squads (FS) and 1012 Static Surveillance Teams (SST) were operationalised to check movement of cash, liquor, drugs & freebies in the State  closely supervised by DEOs, Expenditure Observers in Districts and Special Observers. A total 3 Air Intelligence Units (AIU) of IT Department were also set at different stations in Kolkata, Andal in Durgapur and Bagdogra in West Bengal..

The progressive seizure of all five States/UT and bye-elections where assembly elections have been/are being held, as on date is Rs. 1019.07 Crore (this includes seizures of Rs. 12.11 Crore in bye-elections also) 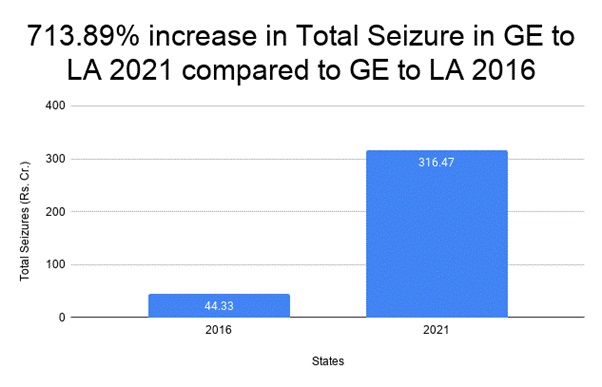 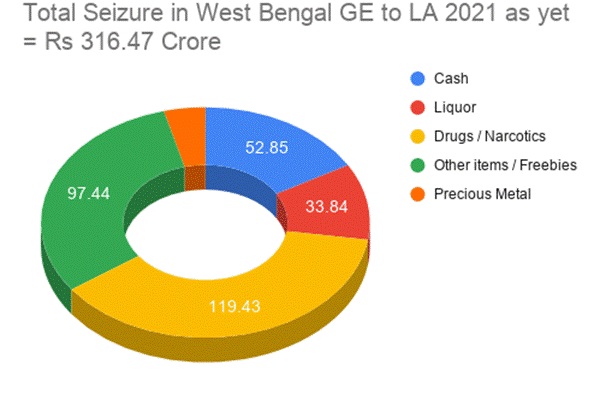 Election Commission of India’s cVIGIL App is a citizen centric mobile application which empowers people to report cases of MCC violations in real time basis, with auto populated details of location and responded within 100 minutes after verification at field level. A total number of about 195815cases of Model Code of Conduct violations for West Bengal were reported through the cVIGIL app out of which 184563 cases were disposed as of today (4:00 PM)

All the Polling Stations followed COVID-19 Safety protocols. To control the spread of Coronavirus, the Election Commission had invoked powers under Article 324 to curtail the timing of campaign. The Commission further wrote to political parties to abide by laid down covid protocols for campaigns and instructed District authorities to take necessary action under extant rules in case of any violations and to cancel permission for campaigns in such instances.  The Commission reiterated the powers to District Election Officers and Returning Officers to cancel the public meetings / rallies if violations are observed.

The Commission has laid out an elaborate security plan to ensure smooth and safe conduct of elections. Drones were used to keep watch over vote proceedings. Central Armed Police Forces (CAPFs) along with the local police force were deployed to ensure peaceful, intimidation free and conducive atmosphere for the smooth conduct of elections in a free, fair, inclusive and accessible manner. Peaceful and orderly voting took place on 14,480polling stations.

The Commission expresses gratitude to all stakeholders specially the voters for their enthusiastic and fearless participation in the election process today. Commission particularly thanks PwD electors, senior citizens, service voters for taking part in elections honoring COVID protocol norms. For the safety of the voters and the election officials it was ensured that the Polling Stations were sanitized one day prior to poll and facility of thermal scanning, hand sanitisers, face masks were also made available at the Polling Stations. Proper arrangements for social distancing were put in place. The Commission also recognizes the services of the entire electoral machinery including polling staff on duty, security personnel, supervisory staff, Observers, Special Observers, Railway Authorities, enforcement agencies and also the Health authorities for making comprehensive arrangements and dedicatedly working towards successful conduct of free, fair, transparent and safe elections despite pandemic. The Commission solicits active cooperation, close collaboration and constructive partnership from all stakeholders including media for delivering smooth and peaceful elections.