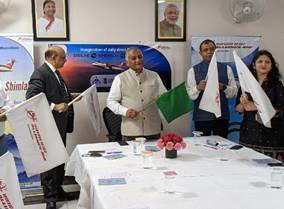 To offer enhanced air connectivity between Delhi and Himachal Pradesh, the Ministry of Civil Aviation and Alliance Air have recommenced the Delhi-Shimla-Delhi flight which will operate daily effective from 26th September 2022. This flight will operate with a brand new ATR42-600.

Initially, this flight of Alliance Air was flagged off by the Prime Minister Shri Narendra Modi in 2017. After operating for more than 2 years under UDAN, this flight was discontinued due to the renovation of the airport and the unavailability of suitable aircraft. Meanwhile, AAI has renovated Shimla airport and Alliance Air has inducted ATR-42 aircraft exclusively to connect airports of Himachal Pradesh.

In his address, MoS Gen. Dr V. K. Singh (Rtd.) said that this flight will provide convenience for the people of Shimla and Delhi NCR. The ministry is working to further increase this ATR connectivity from Shimla to Kullu and Shimla to Dharmshala. He congratulated the state government and thanked them for their support and cooperation.