A rare case of limb saving surgery on a septuagenarian at Apollo Cancer Centre, Bangalore 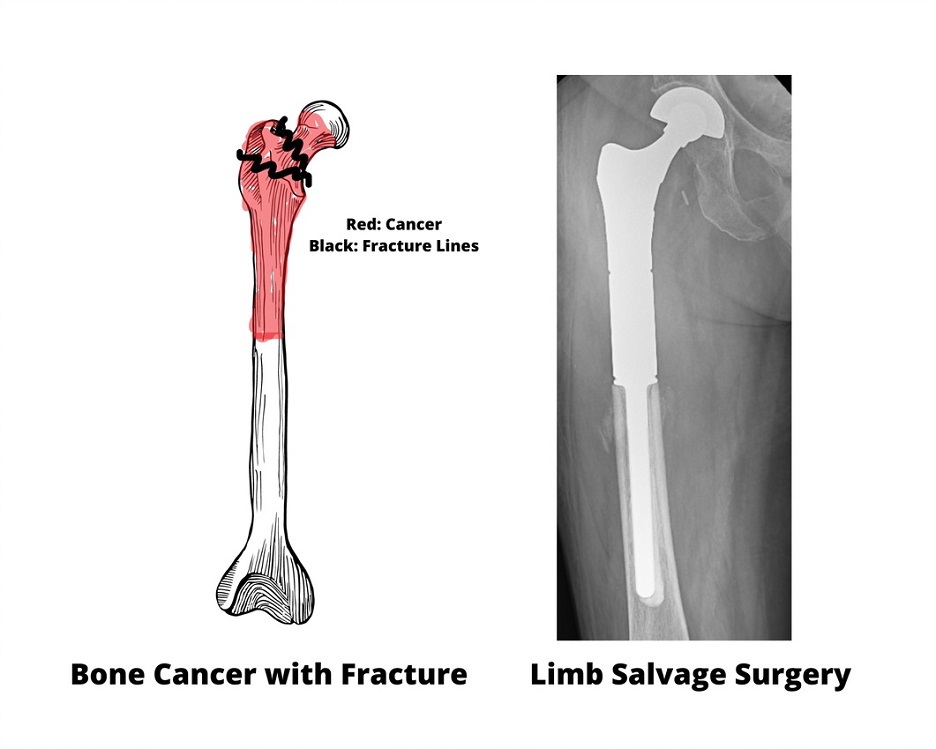 Bangalore, 25 April 2022: Apollo Cancer Centre, Bangalore, performed a complex limb salvage surgery of tumour mega prosthesis to treat a unique case of fracture caused due to bone cancer in the right upper thigh bone. The surgery was performed on Bhagyasree, a 76-year-old avid walker, a septuagenarian who had sustained a fracture. “She had been complaining of pain in her right hip for the past two months and was unable to walk two days before being admitted to the hospital”, quoted her relatives. The team at the Apollo Cancer Centre in Bangalore could identify and successfully treat such a rare case of geriatric hip fracture due to bone cancer.

The Limb Salvage Surgery was performed under the supervision of Dr. Srimanth BS, lead consultant Orthopaedic Oncology services, Apollo Cancer Centre, Bangalore, along with a dedicated team to get the best results from the surgery.  The surgery lasted for three hours wherein in the first stage; the team of doctors removed the 17 cm long broken bone as a single piece (preventing tumor spillage by fixing it with a wire around the tumor). The second stage was to perform a tumor bipolar mega prosthesis replacement surgery.

According to Dr. Srimanth, the evaluation showed a fracture in an abnormally looking right upper thigh bone (Femur). “A CT-guided biopsy and whole-body PET CT scan indicated an aggressive bone sarcoma as the cause of fracture (Chondrosarcoma), which is rare since most the geriatric fractures are due to osteoporosis or bone metastases. Chondrosarcoma meanwhile has a low reported incidence of 1-2 in 10 lakh population per year. Identifying the cause of fracture along multi-disciplinary route aided the treatment”.

Dr. Srimanth pointed out that the case of Bhagyasree, who was living independently, was challenging mainly due to issues related to old age, uncontrolled diabetes, hypertension, and the fractured bone itself. “When the patient is diagnosed with a fracture due to bone cancer, amputation is often performed because there has been a spillage of the cancer cells. This would have had a profound negative impact on the patient in all aspects. It was a technical challenge to remove the broken bone in one piece and the result was confirmed by our intra and postoperative evaluation of the removed bone. Adequate counselling, teamwork, a Custom Rehabilitation program, and post-operative care were vital components enabling Bhagyashree to walk with the support of a walker frame from the second-day post-operation,” he added.