New Delhi, 14 April 2021: Union Ministry of Agriculture and Microsoft India yesterday inked a Memorandum of Understanding (MoU) for a pilot project in 100 villages of 6 states. On this occasion, Union Minister for Agriculture and Farmers Welfare, Rural Development, Panchayati Raj and Food Processing Industries Narendra Singh Tomar stated that Prime Minister Narendra Modi’s idea of digital agriculture is now taking shape. After taking over as Prime Minister in 2014, Modi has laid great emphasis on the use of modern technologies in farming sector, so that farmers can get benefitted and enhance their income through it. With the use of technology farming will be a profitable venture for the farmers and the new generation will also get attracted towards agriculture.

Union Agriculture Minister Tomar said that as per the government’s idea of transparency, the money of various schemes including Prime Minister Kisan Samman Nidhi (PM Kisan) is being deposited directly in the bank accounts of the beneficiaries. Similarly, MNREGA also is on the priority list of the Prime Minister. Though progress used to happen under MGNREGA earlier, it was difficult to explain the scenario properly when asked. Also, this scheme used to encounter several complaints. But thanks to the use of technology as per the idea of the Prime Minister, it’s a matter of great pride that all the data related to MNREGA is now available with the government. This enables wages of the labourers going directly to their bank accounts. Today, around 12 crore people are having job cards under MNREGA. Of this, 7 crore keep coming to get jobs. 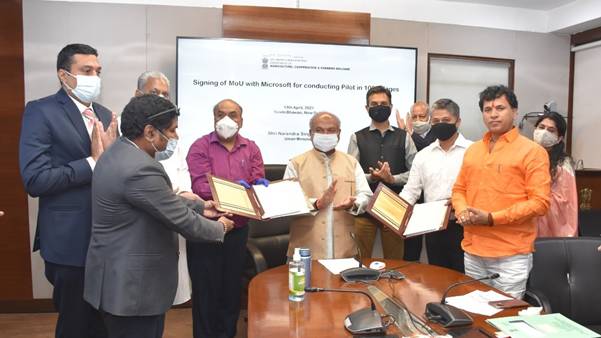 He said that the agricultural economy is the backbone of our country. The agriculture sector has contributed positively to our country’s economy even in adverse conditions like Corona epidemic. Any loss to agriculture is a loss for the country. This is the reason why the Prime Minister has taken many tasks on priority basis. Schemes are being formulated and implemented one after another to make farming profitable for small farmers.

Microsoft has come forward to start a pilot project in selected 100 villages in 10 districts of 6 states (Uttar Pradesh, Madhya Pradesh, Gujarat, Haryana, Rajasthan and Andhra Pradesh) to develop farmer interface for smart and well-organized agriculture, including post-harvest management and distribution. For this project, Microsoft has joined in with its local partner, CropData. In this regard, a MoU and tripartite agreement have been exchanged in the presence of Cabinet Minister Shri Tomar and the two Ministers of State. The project is for one year and both sides inking the MoU will bear the cost on their own. This project will carry out various tasks for the betterment of farmers in the selected 100 villages, which will enhance their income. This project will reduce the input costs for farmers and make farming easy. It is proposed to undertake similar pilot projects with other public and private players to create a vibrant digital agro-ecosystem in the country.

The government aims to increase the income of farmers by removing the bottleneck of inconsistent information. A number of new initiatives have been launched to achieve this goal. A major initiative, in this regard, is the creation of Agri-Funds based on the National Farmers Database. The government is preparing a farmer database by linking the land records of farmers across the country. The data related to PM Kisan, Soil Health Card and Pradhan Mantri Crop Insurance Scheme, available with the government, have been integrated and the process of inclusion of other data is going on. Union Agriculture Minister Shri Tomar has also issued directives for Geo tagging of all the assets that will be created by the virtue of all schemes of the Ministry of Agriculture.