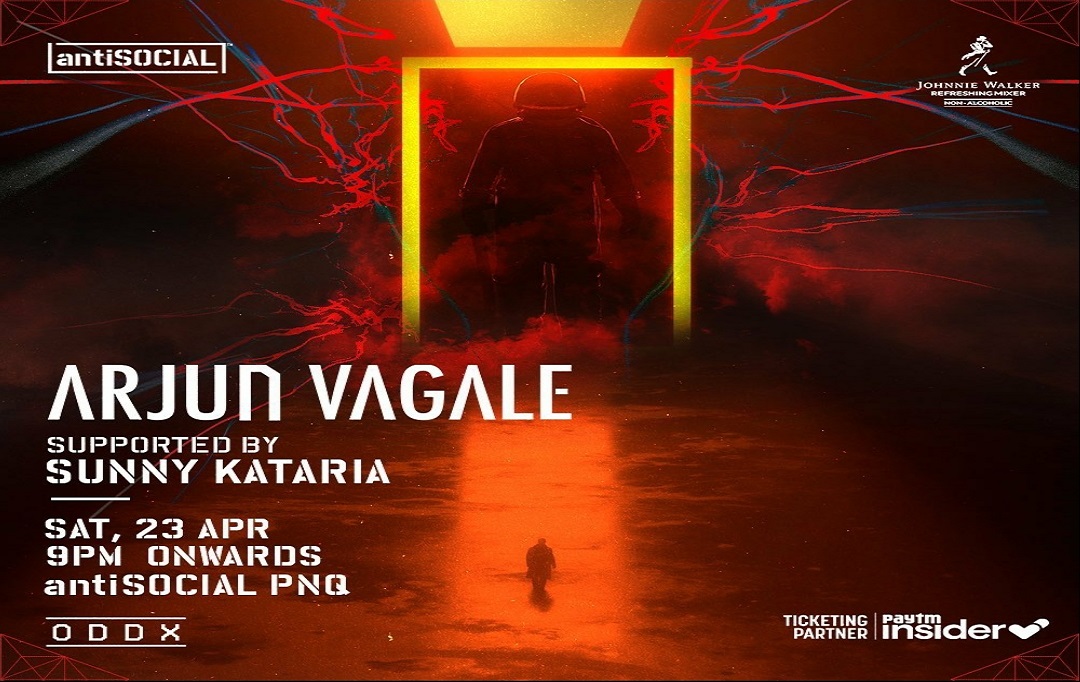 Pune, 22nd April 2022: Bringing in his sophisticated and powerful breed of techno to the Main Stage, Arjun Vagale is all set to hit the stage live at antiSOCIAL Pune this weekend. Hop in for an audiovisual set that immerses the crowd to vibe on the banging techno beats.

Widely celebrated as the pioneer of techno in India, Arjun Vagale steers the course of the country’s expanding underground electronic movement. Through his 20-year career, Arjun Vagale has risen to the forefront for the quality and depth of his productions and DJ sets, while always staying true to his roots. Whether packing on the dance floor or producing yet another monster tune, Arjun’s total dedication to house and techno is evident in everything he does.

Known for his intense, driven and raw sound, Arjun is one of the most prolific artists to come out of Asia, and as one of India’s most acclaimed DJs, his cutting-edge productions have seen a massive global reach. A man with a serious passion for the underground, he has received numerous awards for his DJing and production skills, as well as being named one of “Asia’s finest Underground Music Exports.”

Taking the risk of moving away from a major mainstage career at a time when his erstwhile live act, Jalebee Cartel, was sharing headlining spots with The Chemical Brothers, The Prodigy and Modeselektor, Arjun followed his love for the counterculture by traveling into darker, more experimental terrain. Always inspired by the sounds coming out of Berlin, he based many summer tours out of the techno Mecca before splitting his time between New York and Goa.

Arjun’s knowledge and use of technology in the booth is unparalleled, as he innovatively wields drum machines and modular synthesizers to create an electrifying atmosphere. His ability to really ‘move’ a dance floor, not just play to it, has taken him to legendary clubs like Tresor, Womb, Verboten, Baum, and Paradiso, and key festivals including BPM, Sonar, ADE, Fusion, Awakenings, Sunburn and VH1 Supersonic, playing alongside the genre’s most prominent artists such as Richie Hawtin, Adam Beyer, Dubfire, Josh Wink and Sasha, to name but a few.

His productions have truly put him – and India – on the electronic music map. Early tracks like “She Said” and “Terrakoz” were championed by Richie Hawtin and Dubfire, and subsequently licensed to compilations by Carl Cox and John Digweed. Remixes soon followed for Danny Tenaglia, Victor Calderone and Dave Seaman. Now signed to SCI+TEC, Tronic, Octopus, Suara, Herzblut, and Paul Ritch’s Quartz, Arjun’s signature sounds are regularly played by Carl Cox, Adam Beyer, Hawtin and Dubfire, all the way from DC10 in Ibiza to Berghain in Berlin.

2017 has been his biggest year yet. From headlining Vh1 Supersonic Awakenings on home turf, and subsequently playing Awakenings Festival in Holland, to signing with Pan Pot’s Second State imprint and Adam Beyer’s legendary Drumcode, Arjun is clearly at the top of his game.

Through his 20-year career, Arjun Vagale has risen to the forefront for the quality and depth of his productions and DJ sets, while always staying true to his roots. Whether packing in the dance floor or producing yet another monster tune, Arjun’s total dedication to house and techno is evident in everything he does.